Global equities gained 4.00% in December to finish up 18.54% for the year, their best annual gains since 2019 – notwithstanding the COVID-19 pandemic-induced global recession. The MSCI All Country World Index (ACWI), which comprises U.S., developed and emerging market stocks, closed out 2021 up 18.54%, only 38 basis points off its all-time high on November 16th. Since its launch in1998, the ACWI has returned 8.33% on an annualized basis; in 2021 it racked up 63 all-time highs. 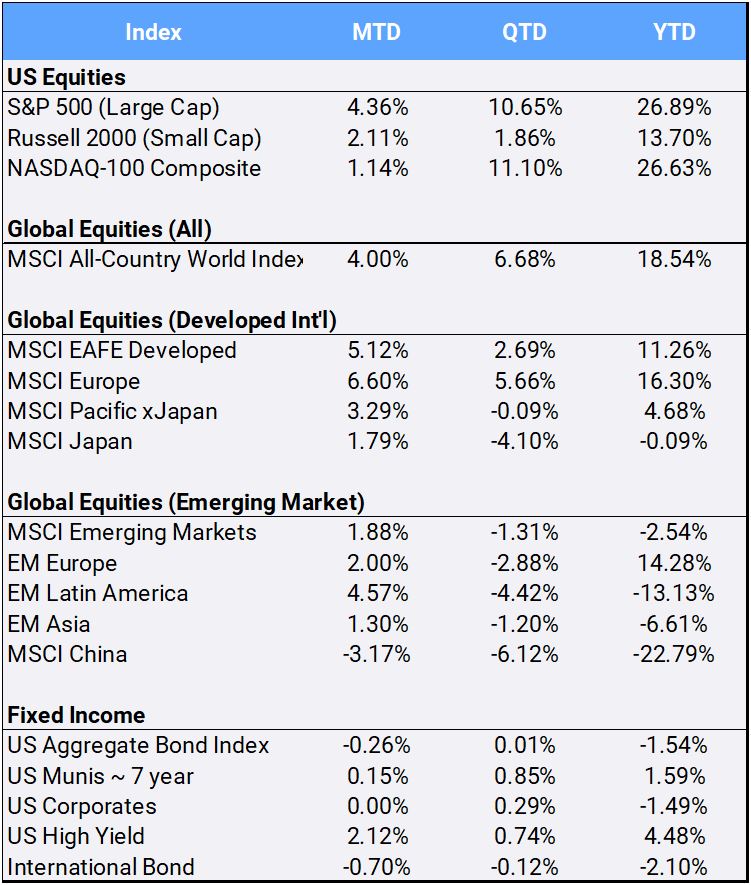 Click the image to view the chart larger.
Source: Bloomberg Pricing Data, as of December 31, 2021

As U.S. stocks climbed, market fear subsided; the CBOE S&P Volatility Index (VIX) eased to 17.22 after beginning the year at 22.75. Also helping was the fact that 2021 was a rare year in which the S&P 500 didn’t have a drawdown of greater than five percent. All eleven Global Industry Classification Standard sectors gained in December and finished 2021 in the black, led by energy (53.43%), real estate (46.20%) and financials (35.04%). The consumer services sector lagged this year, gaining “only” 16.04%.

The U.S. Aggregate Bond Index slipped -0.26% in December to end down -1.54% for the year – marking its worst annual return since 2013 and its second annual decline since the start of the new century. Inflation returned to the top of the news cycle as consumer prices rose 6.8% year-on-year, the fastest annual pace since 1982. To combat inflation, the U.S. Federal Reserve announced it would double the pace of tapering its bond buying to end in March and forecasted three rate hikes in 2022.

In Europe, the Bank of England became the first central bank to formally raise its key interest rate since the onset of the pandemic, as U.K. inflation hit 10-year highs. The European Central Bank further reduced its bond purchases, but asserted it will sustain monetary policy support while keeping rates unchanged. Germany lowered its growth forecast for 2022 as wholesale prices there also experienced record surges. International bonds slipped -0.70% in December and finished 2021 down -2.10% after posting seven straight years of positive annual returns.

In international equities, developed countries as measured by the MSCI EAFE index gained 5.12% in December to return 11.26% in 2021. Emerging markets eked out a 1.88% gain this month, but it wasn’t enough to pull the EM index into the black as it slipped -2.54% on the year. Turkey at -23.53%, Brazil at -23.53% and China at -22.79% had the worst EM returns in 2021. China’s central bank cut its benchmark lending rate for the first time since April 2020 to combat its slowing economy, while the World Bank downgraded its growth outlook for the country. Foreign currencies appreciated 0.72% in December, but depreciated -4.62% against the U.S. dollar this year to weigh on the annual returns of foreign assets.

Last, Bitcoin dropped -18.91 in December, a rocky finish to an otherwise banner year; the world’s largest digital asset was able to manage a 59.79% return in 2021, following its meteoric 305.07% climb the previous year.