2022 was a brutal year even if its final quarter was slightly less so. Global equities fell 3.94% in December, but still managed to gain 9.76% for the quarter, making Q4 the year’s best for the MSCI All-Country World Index. That said, the ACWI tanked -18.36% in 2022, posting its worst annual return since the 2008 Global Financial Crisis. A miserable 2022 followed 2021’s impressive 18.54% gain, its eighth best year on record. Stocks struggled as raging global inflation put increasing pressure consumers and raised concerns about the global economy slipping into recession. 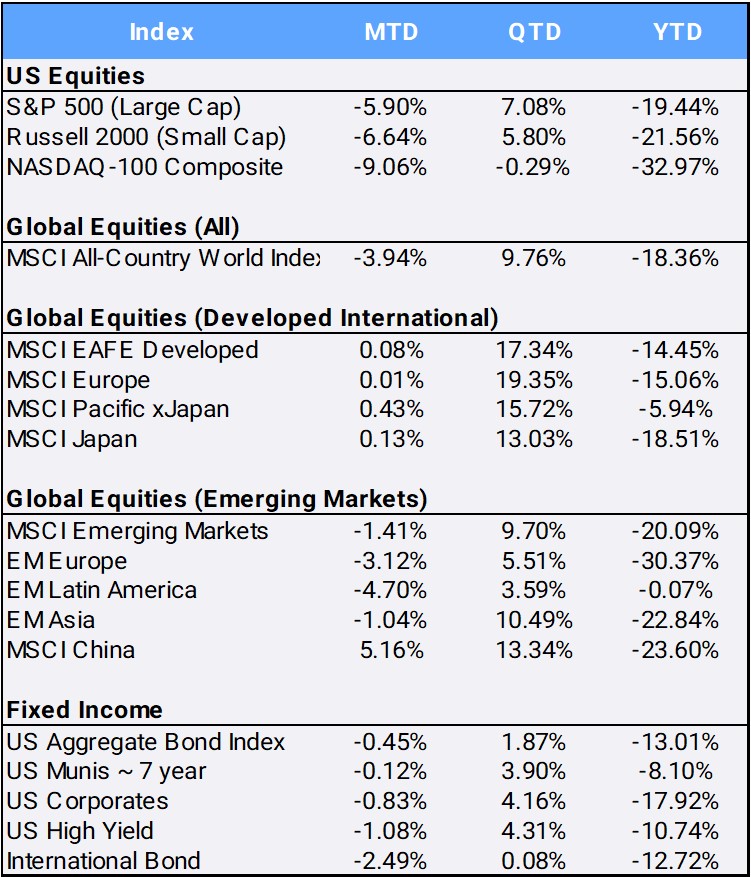 Click the image to view the chart larger.
Source: Bloomberg Pricing Data, as of December 31, 2022

The S&P 500 finished 2022 with its fourth worst annual return since 1945, as the U.S. large cap index fell -19.44%. Energy was the only S&P500 sector to end the year in positive territory, soaring 64.56% in 2022 – the sector’s best annual return on record. Exxon Mobil and Chevron were the largest contributors to positive return, gaining 80.26% and 52.95% respectively. Conversely, Consumer Discretionary and Communications Services were the worst performing sectors— racking up their worst recorded years since 1989–dropping -36.23% and -37.66% respectively.

For the first time since 1969, and only the fourth time since 1929, stocks and bonds both ended in negative territory. The U.S. 10- year Treasury yield spiked from 1.51% to 4.33% before ending the year at 3.88%. The Federal Reserve implemented the steepest round of rate hikes since the 1980s to fight the highest inflation in 40 years, raising rates from near zero in March to a range of 4.25%–4.5%. The U.S. dollar logged its best annual gain since 2015, appreciating 8.21% against an international basket of currencies in 2022.

The inverse relationship between interest rates and bond prices meant global bond markets got clobbered in 2022; international bonds and the U.S. aggregate bond index AGG were down -12.72% and -13.01% respectively. For perspective: the previous worst annual year for the AGG was during 1994’s great bond sell-off, in which the index dropped -2.92.

Internationally, in developed markets Portugal came out on top with only a -2.35% drop compared with Sweden at -30.01%. In emerging markets Turkey soared, up 83.85% for the year, compared with China, down -23.60%. Despite its poor annual performance, China finished the year strong, gaining 5.15% in December and 12.69% in Q4 on growing optimism about China’s reopening after three years of strict zero-COVID 19 lockdowns.

What made 2022 so unusual was the breadth of price pressures, as the global inflation rate finished the year at 8.8%. For many emerging markets, high inflation is a recurrent challenge, but developed markets haven’t seen prices so inflated since the early 1980s. U.S. consumer prices rose 7% in 2022, the highest in four decades. In Germany, the rate will be closer to 10%, its first bout of double-digit inflation since 1951. The Bank of Japan responded to its highest consumer prices in 41 years – despite stagnant wage growth—by tweaking its long-standing low yield-curve control policy. The surprise move roiled currency markets with speculation over a possible shift away from former Japanese Prime Minister Shinzo Abe’s famed economic stimulus strategy known as “Abenomics.”

Crude oil soared and receded in 2022, surging to more than $130 per barrel after Russia invaded Ukraine before finishing the year at $80.26—a net gain of 6.71% gain for the year. Most other commodities followed a similar pattern as inflation and interest rates dominated the headlines. The diversified Bloomberg commodity index slipped -2.45% in December, but still was up 16.09% for the year. Gold rallied 9.84% in Q4, but it wasn’t enough to pull its 2022 return out of the red, finishing slightly down -0.28%.

After a banner 2021 in which Bitcoin soared 59.79%, the world’s largest cryptocurrency gave it all back and then some in 2022, plunging -64.22%. More than $2 trillion in crypto value was wiped out as speculators fled amidst numerous bankruptcies. The most spectacular flame out was crypto exchange FTX, which earlier in the year was valued at $32 billion, but collapsed overnight in the final weeks of 2022 with assets unaccounted for; founder Sam Bankman-Fried was extradited from the Bahamas to face criminal fraud charges.

The CBOE Volatility Index (VIX), known as the “fear index,” started the year at a complacent 17.22 (VIX values below 20 generally correspond to stress-free periods in the markets, while values over 30 represent large volatility from increased uncertainty and risk). Early on, global economies were trying to emerge from the Covid-19 pandemic, with persistent lockdowns in China and other lingering supply bottlenecks forming what the U.S. Fed in 2021 had referred to as “transitory” inflationary pressure. However, on March 7 the VIX spiked as high as 36.45 and spent 91% of trading days in 2022 above 20. Russia’s invasion of Ukraine in February, and the subsequent weaponization of its food and energy exports in the face of sweeping trade sanctions imposed by the West, sent prices skyrocketing and pushed inflation to multi-decade highs across major economies. To give an indication how perverse volatility traded, the CBOE 5% put-protection index (PPUT), which buys market protection, actually dropped -19.81% on the year, whereas the CBOE Put-Write Index that sells market insurance only fell -7.66%.

Fears over rising interest rates pushed the S&P 500 Index lower for a second consecutive week and to levels last seen in early November. Nearly every sector within the index recorded sharp losses, except for energy shares, which were supported by a partial rebound in oil prices.