The Russian invasion of Ukraine sent risk assets plummeting in February as the conflict, the resulting sanctions and soaring inflation add more uncertainty to the global economic picture. The MSCI All Country World Index dropped -2.58% in February to bring YTD returns to -7.37%. Bond markets were unable to provide reprieve as the US Aggregate and International bond indices returned -1.12% and -1.66% respectively. The CBOE/S&P Volatility Index, often referred to as the “fear index” spiked to 30.15 this month, well above 17.22 where it started the year. 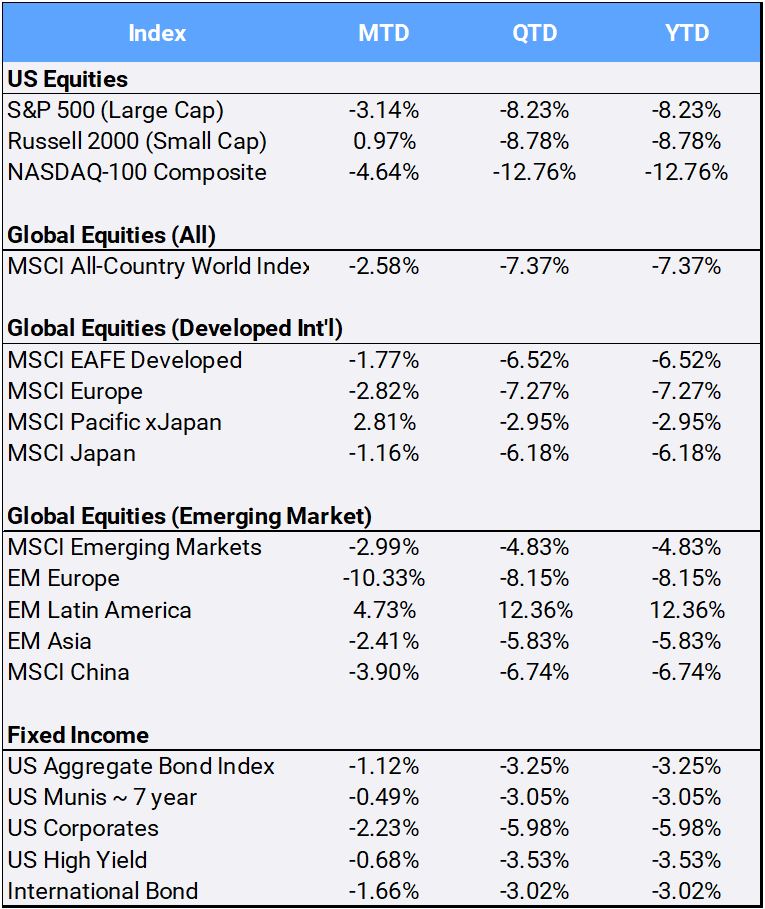 Click the image to view the chart larger.
Source: Bloomberg Pricing Data, as of February 28, 2022

The invasion led investors to wonder how it might affect Federal Reserve policy. Chairman Jerome Powell said on March 2nd the central bank expects to raise rates by 25 basis points at its March meeting, and will proceed ‘carefully’ after that, interpreted as continuing with 25-bps increases. In the U.S., the Core Personal Consumption Expenditure price index (excluding food and energy) rose 5.2% YoY in January and 0.5% MoM, its highest levels since April 1983. In addition, the U.S. Producer Price Index jumped 1% MoM in January, twice the anticipated level, and soared 9.7% YoY.

Russia’s invasion of Ukraine represents one of the worst security crises in Europe in decades, and Russia was the worst performing country this month as its index plunged -52.75%. The Bank of Russia halted trading at the end of February to prevent further capital from leaving the local market in an attempt to shield the economy from sweeping sanctions. Russia represents ~2.15% of the MSCI Emerging Markets index, which slipped -2.99% in February to bring YTD returns to -4.83%. Things have gotten so dire that index giant MSCI declared that the Russian market is “uninvestable” after stringent new Western sanctions and central bank curbs on trading – making the potential removal of Russia listings from its benchmark indexes a possible “natural next step”. (Yikes!)

Latin America remains a bright spot in 2022, gaining 4.73% this month and 12.36% on the year. Brazil represents ~4.95% of the Emerging Markets Index and has been the index’s largest positive contributor this year, gaining 4.57% in February and 18.04% YTD as its rate hikes and higher tax revenues have attracted investors. The country’s central government accounts – Ministry of Finance, Social Security, and the Central Bank – have started 2022 with a record surplus of $15 billion, the best month since the historical series began in 1997.

In terms of market capitalization size, small cap stocks (<$2bn market cap) outperformed their large cap peers, with the Russell 2000 staying positive at 0.97% vs. the S&P 500 dropped -3.14% in February. In terms of style, value stocks continue to add value or at least add a cushion, relative to their growth counterparts. The Russell 3000 Value and Growth indexes returned -1.17% and -4.07% respectively in February to bring their YTD returns to -3.82% and -12.61% respectively.