Global equities started the New Year strong, but then faltered by month’s end. As of January 21, the MSCI All-Country World Index was up 3.75% for the month and making new all-time highs — but then sold off and finished the month down 0.45%. In the U.S., the S&P 500 Index posted its first negative month since October, declining 1.11% despite a strong start to earnings season. Of the companies reporting financials by month’s end, 82% substantially beat Wall Street’s earnings estimates, and 76% showed positive surprises for revenue. 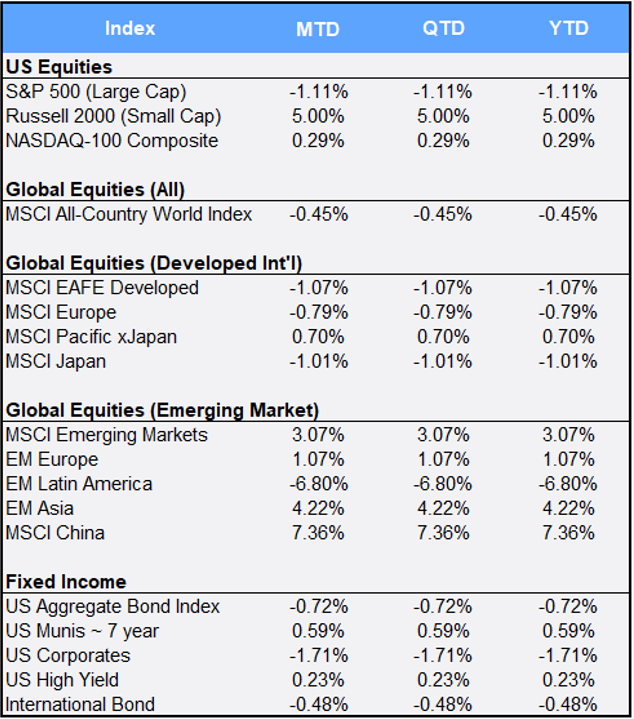 Click the image to view the chart larger.
Source: Bloomberg Pricing Data, as of January 31, 2021

U.S. small-cap stocks rose for a fourth month, gaining 5.00% in January. Yet it was a list of heavily shorted stocks at the center of a social media frenzy that grabbed headlines. GameStop screamed up 305% to become the second-largest name in the Russell 2000 index. Other stocks caught up in the Reddit-driven frenzy included Express (up 534% for January), AMC Entertainment (up 513%) and Bed Bath & Beyond (up 89%).

Seeing the impact of social media ripples on broader pricing in global equities exacerbated investor jitters. The CBOE/S&P Volatility Index, a gauge of market stress also known as the VIX, jumped 45% in January to finish at 33.09.

New 2020 data showed the U.S. economy continued its rebound, albeit more slowly. Real GDP grew at a 4% annualized rate in Q4, a drop from the 33.4% annualized rate in Q3. Overall, the U.S. economy contracted 3.5% in 2020 — its largest annual decline dating back to 1948. The Fed left rates unchanged this month, as expected, keeping monetary policy loose in an effort to boost the overall economy. Chairman Jerome Powell noted the recovery’s slowdown and continued weakness in COVID-exposed sectors.

The U.S. dollar edged up 0.72% in January against a global basket of currencies.