The S&P 500 closed the first quarter at a record high, climbing 4.42% in March. That brought YTD returns to 5.77%, ahead of President Joe Biden’s unveiling of a $2.25 trillion infrastructure and stimulus spending program after the trading close on March 31st. The White House outlined a plan to raise corporate taxes to 28%, combined with measures designed to stop offshoring of profits, to fund the infrastructure plan within 15 years. Globally, the MSCI All-Country World Index (ACWI) gained 2.67% in March to post its fourth straight quarterly gain, returning 4.57% in Q1 of 2021. 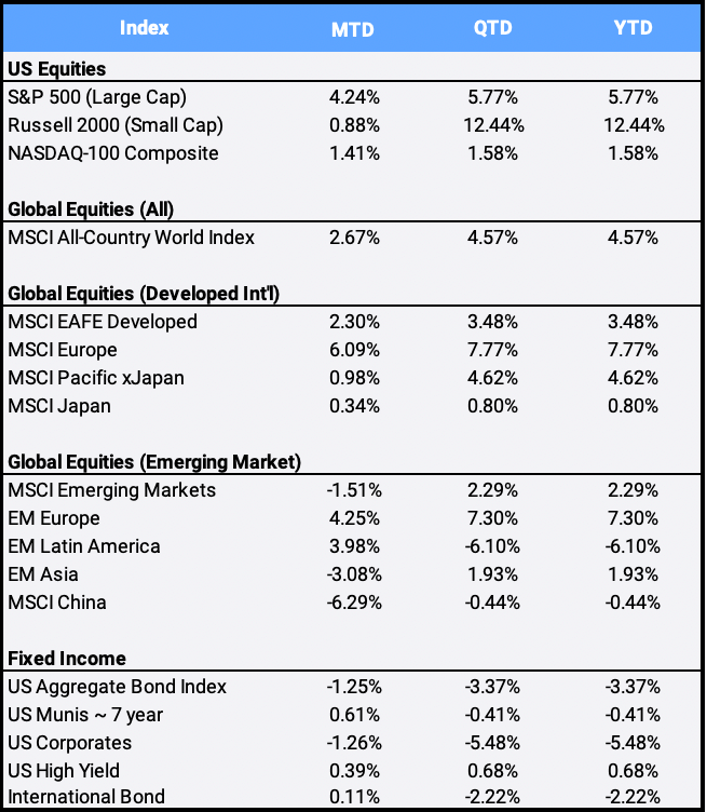 Click the image to view the chart larger.
Source: Bloomberg Pricing Data, as of March 31, 2021

Meanwhile, the latest stimulus program heated inflation fears and spooked the bond markets. The S&P U.S. Aggregate Bond Index plunged 1.25% in March and 3.37% in the first quarter to mark the flagship fixed income index’s worst quarterly return since September 1981. Despite Fed chairman Jerome Powell stating the Fed Open Market Committee’s belief that inflationary pressures would only be transitory, the yield on the 10-year treasury rose to 1.74%.

The Dow Jones Industrials and Nasdaq 100 indexes gained 6.62% and 1.41% respectively in March to bring their Q1 returns to 7.76% and 1.58%. The Dow’s outperformance over the tech-heavy Nasdaq indicated a rotation trade, the first time the Dow beat the technology-heavy Nasdaq on a quarterly basis since 2018. Tech stocks are especially sensitive to rising interest rates because they often depend on borrowing money cheaply to invest in their future growth.  The jump in interest rates also forced many investors to reconsider paying such high prices for many stocks, particularly the tech giants that were big winners earlier in the pandemic.

The Russell 2000 small cap index gained 0.88% in March to bring its Q1 return to an impressive 12.44%, outperforming its large cap peers over that span. A strengthening economy due to the increasing rollout of COVID-19 vaccinations and massive spending by the US government is expected to boost profits for many domestic companies in the year ahead. A sector rotation appears underway, as the two worst performing sectors in 2020 led this first quarter. Last year energy and financials fell 1.69% and 32.84%, respectively; in Q1 they were up 30.70% and 15.99%.

Overseas, developed markets climbed 2.30% higher this month to bring the MSCI EAFE index to a 3.48% Q1 return. However, emerging markets slipped 1.51% in March. China, the largest constituent country in the region, was also the index’s biggest loser, falling 6.29% this month and ending in the red YTD, slipping 0.44% in Q1. Internet stocks make up more than 42% of the MSCI China index, and its two largest holdings, Tencent and Alibaba, fell 4.64% and 8.14% in March on fears that more Chinese companies may be de-listed from U.S. stock exchanges after the 2020 passage of the Holding Foreign Companies Accountable Act requiring companies to state they are not owned or controlled by foreign governments.