In their worst Q1 performance since 2020, global equities ended the first quarter down -5.36% despite rallying in March 2.17%. In the U.S., both the S&P 500 and Nasdaq indices posted their first quarterly loss in two years, returning -4.95% and -9.08% respectively. Markets have been shaken by the Russia-Ukraine war, global inflation and the inversion in the U.S. treasury yield curve between short- and long-term rates as the U.S. Federal Reserve began to raise interest rates. The CBOE Volatility Index, or VIX –often referred to as the “fear index”—spiked to 36.45 during March and closed the quarter at 20.56, a 19.40% jump from the outset of 2022. 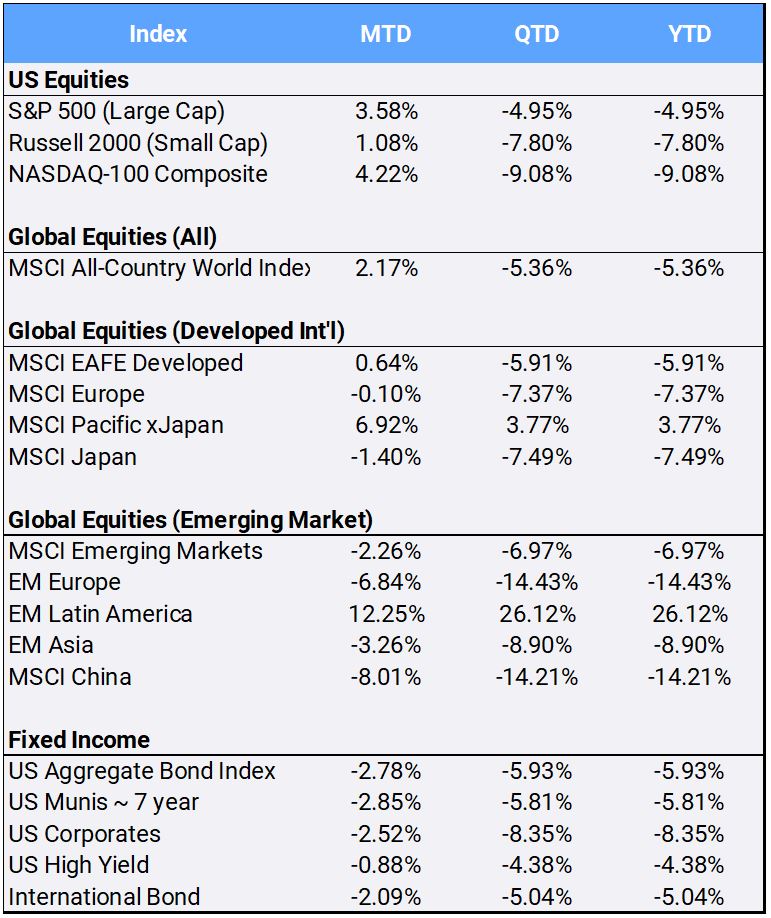 Click the image to view the chart larger.
Source: Bloomberg Pricing Data, as of March 31, 2022

Internationally, the MSCI EAFE and MSCI Emerging Markets sank -5.91% and -7.49% respectively for the quarter. Russian stocks resumed trading after a three-week trading halt, but still finished the quarter with the worst country return, falling -66.11% QTD. Stocks in China fell 14.21% in the first quarter, with technology stocks being hit especially hard after the SEC added Chinese internet search engine giant Baidu to its growing list of ADRs that might get kicked off American stock exchanges.

Latin America, however, remains a bright spot in 2022, returning 26.12% in the first quarter. Brazil was the best performing country, gaining 34.29% as the Brazilian real appreciated more than 17% in Q1. In developed markets, Norway and Australia led first quarter EAFE returns, gaining 9.82% and 5.53% respectively.

Bonds prices sank lower in March, as central banks increased interest rates to combat the fastest rising inflation in decades (prices move inversely to interest rates). The U.S. International and Aggregate Bond indices returned -2.78% and -2.09% this month, ending the quarter down -5.93% and -5.04% respectively, in the U.S. bond market’s worst quarterly return since 1980.

The U.S. 2-year treasury rate jumped more than 90 basis points in March to finish at 2.334% — its largest monthly jump since 1984. Meanwhile, the 10-year treasury rate moved to 2.331%; this inversion of the yield curve is a closely watched potential indicator of future recession.

On a more positive note, the diversified Bloomberg Commodity Index posted its best quarter since 1990, returning 25.55% for the quarter. Crude oil jumped 33.33% in Q1. In response, on March 31st the White house announced it will release up to one million barrels per day of oil from the Strategic Petroleum Reserve for the next six months to help tamp down soaring gas prices. President Joe Biden sharply criticized the domestic energy industry for sitting on unused oil supply.

Of the stock market’s 11 sectors, only Energy and Utilities closed out the first quarter with gains, up 39.08% and 4.77% respectively. Communication Services, Consumer Discretionary, and Technology were the worst performing sectors, posting Q1 returns of -11.25%, -9.35%, and -8.51% respectively.