Global Equities rallied 6.03% in October following September’s worst monthly showing since the Coronavirus pandemic shook global markets in March 2020. Still, the MSCI All-Country World Index remains in bear market territory and is down 21.14% on the year – marking its third-worst 10-month start to a year since the 2008 financial crisis and the 2001 dot-com collapse. In the U.S., equity indexes finished higher following a GDP report that came in above expectations growing 2.6% in the third quarter. Small-cap stocks outperformed their larger-cap market peers in October, returning 10.94% and 7.99% respectively. Meanwhile, the Dow Jones Industrial Average finished with its best October performance ever, gaining 13.95%; it was the Dow’s largest monthly gain since January 1976. 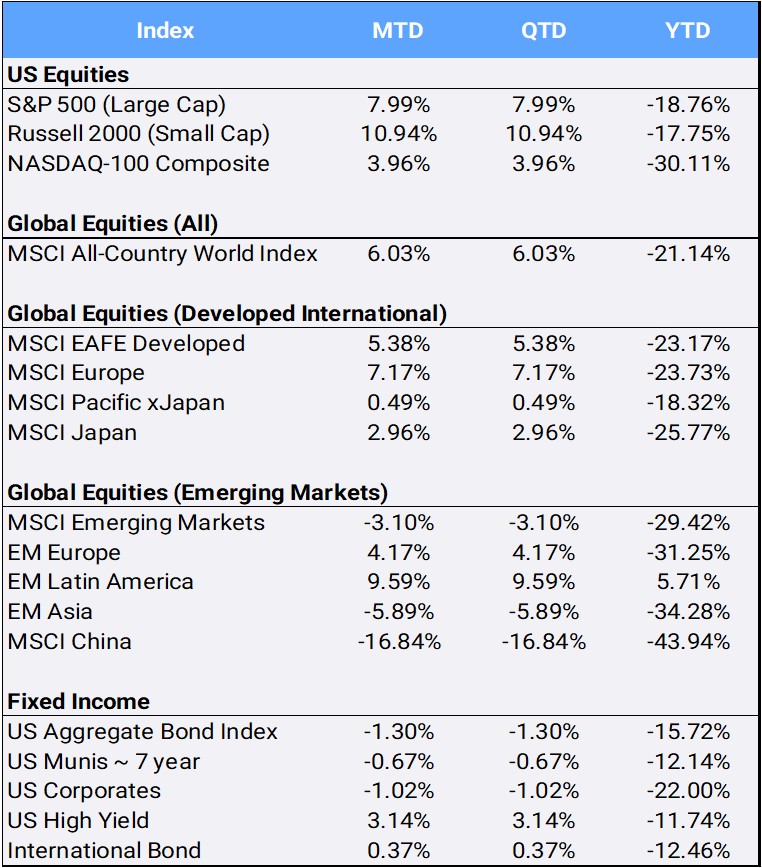 Click the image to view the chart larger.
Source: Bloomberg Pricing Data, as of October 31, 2022

The U.S. bond markets continue to sell off thanks, to ongoing interest rate hikes (yields and prices move in opposite directions). The U.S. aggregate bond market fell 1.30% in October and is now down 15.72% so far in 2022. For perspective, the worst annual year for the “U.S. AGG” was in 1994’s “great bond selloff” which saw the index drop 2.92%. The Federal Reserve raised interest rates an additional 75 basis points at its November 2nd meeting, as widely anticipated. This was the sixth rate hike of the year as the central bank fights to curb record high inflation. The 10-year Treasury yield, which started the year at 1.51%, finished October at 4.05%.

Outside the U.S., the European Central Bank delivered a second straight 75bps hike, while the Bank of Canada surprised with a smaller-than-anticipated half-point raise, citing an economy that is likely to stall in upcoming quarters. The Bank of Japan maintained its ultra-low rates as expected but announced a massive $200B stimulus package to offset rising material costs. In Europe, Germany’s CPI climbed to 10.4% YoY. Finally, Australia’s inflation hit a 32-year high last quarter, raising pressure on the Reserve Bank of Australia for more aggressive tightening. Still, international bonds were able to inch forward 0.37% in October, marking only their second month of gains in 2022. Conveniently, it was only the second time the U.S. dollar slipped this year, depreciating 0.53% this month, but still up 16.57% YTD against an international basket of currencies.

All eleven sectors of the U.S. stock market saw gains in October, with energy again leading the charge in October, up 24.97%. Energy also leads YTD, soaring 67.39% so far in 2022. Oil output in the U.S. climbed to nearly 12 million barrels per day, the highest since the onset of the COVID-19 pandemic. President Joe Biden has called on oil and gas companies to invest some of their record profits in lowering costs for American families. Previously, he has pushed these companies to raise production rather than use profits for share buybacks and dividends. He called for Congress to investigate a “Windfall Tax” for oil companies, declaring “It’s time for these companies to stop war profiteering.”

Sharply rising mortgage rates have depressed the housing market, as new home sales plunged 11% MoM in September and pending sales sank 10.2%. Home prices have started to come down but not nearly enough to offset higher borrowing costs. The real estate sector managed a 2.05% gain in October, but is still down 27.39% YTD.

Disappointing earnings announcements from market stalwarts Alphabet, Amazon, and Meta Platforms saw those mega-cap tech stocks get slammed after reporting. The Nasdaq Composite managed a 3.96% gain, but YTD remains sharply down 30.11%. Value continued to outperform Growth in October as their Russell 3000 style indexes were up 10.25% and 6.00%, with YTD returns at -11.03% and -26.90% respectively.

In the U.K., the pound and bond markets have calmed down after Rishi Sunak took over as prime minister, replacing Liz Truss. Sunak is considering raising taxes to help balance the budget. British stocks gained 5.94% in October, while the broader based MSCI EAFE climbed 5.38%. For the year-to-date, they are down 16.68% and 23.17% respectively.

Chinese President Xi Jinping cemented a historic third term at the Chinese Communist Party Congress. He indicated no major shift in the zero-COVID strategy and reiterated that reunification with Taiwan is a government priority. China is the largest downdraft to the MSCI Emerging Markets Index both on the month and the year, as local stocks have fallen 16.84% and 43.94% respectively. Brazil, on the other hand, is the largest positive contributor to index returns so far in 2022, up 8.62% in October and up 21.15% YTD. Brazilian shares rose following the electoral victory of left-wing candidate Luiz Inacio Lula da Silva in the October 30th presidential election.

Last week stocks fell after the Federal Reserve dashed market hopes for an impending pivot in monetary policy in the form of a pause or slower pace of rate hikes. The technology-heavy Nasdaq Composite Index was hit particularly hard as growth stocks declined more than value companies. The Dow Jones Industrial Average held up much better, extending its relative outperformance from October.

Invitation: How to Talk Money With Your Family

For many of us, money is a taboo subject within the family. But financial conversations can also be important and even necessary. What do existing estate plans look like? Do older generations intend to contribute to grandkids’ college or wedding bills or give everything to charity? Do family elders have enough to support themselves without family assistance? Do we need to add “financial support to parents” to our own financial plan?

Last week equities recorded substantial gains as investors appeared to react to some prominent earnings reports and hints that the Federal Reserve might moderate its pace of interest rate hikes. The S&P 500 Index enjoyed its best weekly gain in nearly four months, while the Dow Jones Industrial Average marked its third consecutive week of gains. Energy shares outperformed within the S&P 500 as oil prices proved resilient despite announcing a U.S. Strategic Petroleum Reserve release. The small real estate sector lagged. Trading remained active and volatile due to the expiration of USD 2 trillion in options contracts on Friday.

Last week, most major indexes were lower as third-quarter earnings reporting season began in earnest, and investors weighed inflation data and their implications for Federal Reserve policy. By the end of the week, the S&P 500 Index had surrendered nearly half of its gains since its March 2020 bottom. Within the index, the typically defensive healthcare and consumer staples sectors outperformed. In contrast, consumer discretionary and communication services shares lagged, dragged lower by heavily weighted Amazon.com, Tesla, and Meta Platforms (parent of Facebook). Likewise, slower-growing value stocks handily outperformed their growth counterparts.

Last week stocks ended higher for the first time in four weeks. Still, they surrendered most of their gains, as some data suggested that the economy was not slowing enough to satisfy Federal Reserve policymakers. The energy sector was the standout performer in the S&P 500 Index as oil prices surged following a decision by major exporters to cut global production. Volumes were muted as investors awaited the start of the earnings season, and some observed the Yom Kippur holiday.

Let’s chat about sustainability and your portfolio.