Global equities experienced their first monthly decline in five months, falling 3.22% in September, but still managed to post an 8.13% return for the third quarter (Q3). That’s especially impressive considering the economic havoc the coronavirus pandemic has brought to the world economy: The MSCI All-Country World Index (ACWI), the global benchmark, has gained a mere 1.37% for the year-to-date (YTD). The Q3 roller coaster was also evident in the U.S. The large-cap S&P 500 index hit an all-time high on September 2, then reversed course and was down 3.92% overall for the month. The index’s QTD and YTD returns were 8.47% and 4.09%, respectively. 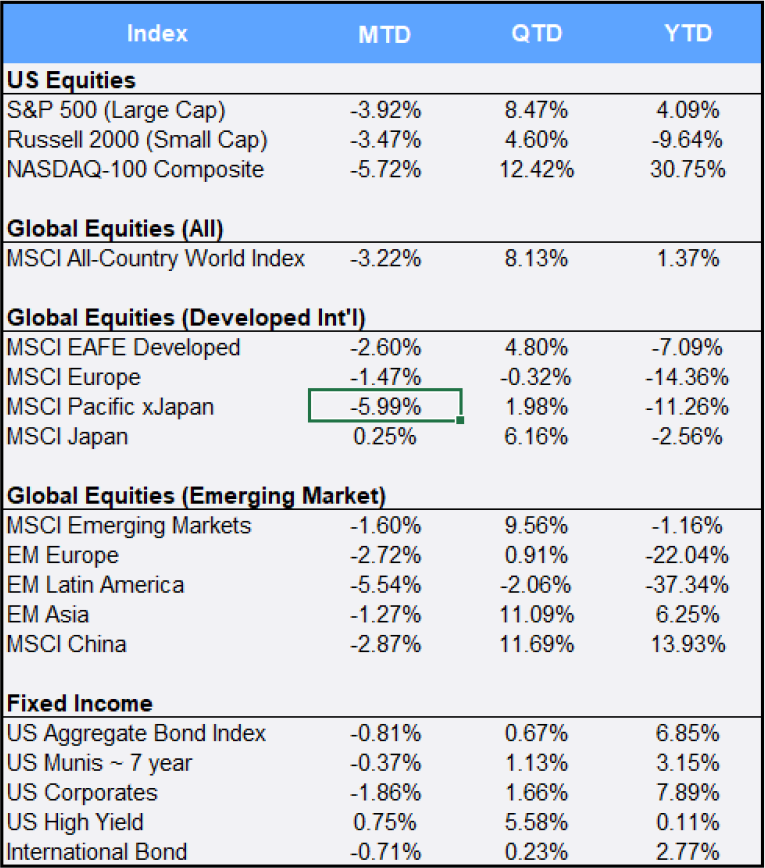 Despite the impressive Q3 stock market performance, the CBOE/S&P Volatility Index (aka “the VIX”) remains elevated, closing September at 26.37. The VIX measures uncertainty as priced into options markets for investors looking to buy portfolio insurance for the time frame ahead. Typically, when stocks move up, the VIX cools off — but the continued high readings on the “fear gauge” reflect the many uncertainties that abound as we head into the year’s end. Issues include not only the election (Who will win? How long will it take to declare a president?) but also the Fed’s new direction (adding a 2% targeted inflation rate to its century-old dual mandate of price stability and employment); the future of the global pandemic (When will we see a vaccine? The threat of a second wave?); and coronavirus-relief stimulus (size and timing).

A small uptick in interest rates brought pause to many U.S. bond indexes, with the benchmark U.S. Aggregate slipping 0.05% in September. The U.S. rate shift had ripple effects elsewhere, as the U.S. dollar appreciated 1.20% against the basket of currencies in the ACWI ex-U.S. all-country index. In addition, the rate change cooled a blistering run in precious metals: Gold and silver fell 4.17% and 17.44% in September, respectively, bringing their Q3 returns to 5.89% and 27.62%.

In international developed markets, the MSCI EAFE returned -2.60% in September. Japan was the second-best performing developed market this month with its 0.25% September gain (behind Denmark’s 1.25% return). Berkshire Hathaway invested roughly $6 billion across five Japanese trading companies earlier this summer. The move appeared to reflect Warren Buffett’s vote of confidence in Japan’s stock market, which is priced at a seemingly inexpensive 15x projected 2021 earnings (vs. roughly 20x among U.S. equities). MSCI Europe is the worst performing region for the year, down 14.36%.

China’s equities fell 2.87% in September, contributing to more than 73% of the broader Emerging Market’s 1.60% decline for September. That put 2020 EM returns back into the red at -1.16% for the year. The largest EM country, China is set to discuss its 14th Five-Year Plan next month, outlining steps to further liberalize its trade policies and advance its efforts to turn the yuan into a major global reserve currency.