Global Equities fell -4.13% in September as rising rates, inflation fears and concerns about the Chinese property market shook investors. After a rough month, the MSCI All Country World Index (AWCI) slipped -1.05% during the quarter but remains up 11.12% YTD. In the US, the S&P 500 index eked out a positive 0.23% Q3 return to mark its sixth consecutive quarterly gain, while the Nasdaq posted its first quarterly loss since March 2020, falling -1.05%. September brought US markets to their worst selloff since the Coronavirus selloff in March 2020, as the S&P and Nasdaq fell -4.76% and -5.73% during the month on concerns on inflation and supply chain issues, which brought their YTD returns down to 14.68% and 11.62% respectively so far in 2021. 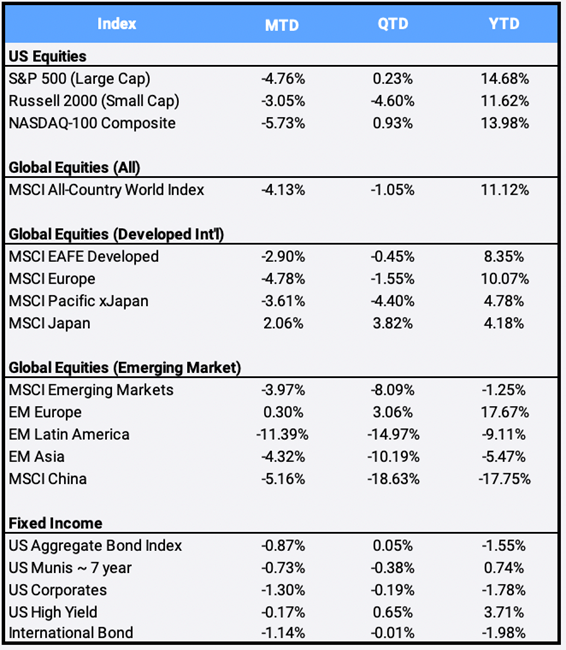 Click the image to view the chart larger.
Source: Bloomberg Pricing Data, as of September 30, 2021

International equities were roiled by fears that Chinese real estate giant the Evergrande Group might not be able to meet its debt obligations; Chinese authorities showed reluctance to bail out the nation’s second largest property developer. The developed and emerging market MSCI indexes dropped -2.90% and -3.97% in September to post negative Q3 returns of -0.45% and -8.09% respectively. International returns were also hurt by an appreciating US dollar, with an international basket of currencies down -1.40% MTD, -1.71% QTD and -3.80% YTD.

Not surprising given the Evergrande headlines, China was the 2nd worst performing equity market in Q3, falling -18.63% behind only Brazil’s -22.44% drop this quarter. Latin America’s largest country has been marred by uncertainty over potentially harmful policy moves by President Jair Bolsonaro, jockeying for position in next year’s election as his popularity plummets.

During their September meeting, the US Federal Reserve’s Open Market Committee (FOMC) lowered its outlook for GDP growth to 5.9% this year, down from the June forecast of 7%; inflation was revised upward to 3.7% from 3%. With prices potentially remaining elevated and the labor market moving toward full employment, uncertainty looms over the timing of rate hikes and when and how quickly the Fed will wind down its aggressive asset purchases. The ten-year Treasury rate inched up to 1.52% this month, up from 1.30% at the end of last month; it had ended last quarter at 1.45% and 0.93% at the start of the year. With yields moving inversely to prices, the US Aggregate Bond index fell -0.87% in September to end the quarter basically flat at 0.05%, and down -1.55% YTD.

Bitcoin sold off -7.60% in September, as China declared all cryptocurrency transactions illegal. Still, the world’s largest cryptocurrency gained 25.59% in Q3, and remains up 49.80% YTD so far in 2021.