Global Equities fell 9.34% in September in their worst month since the Coronavirus pandemic shook global markets in March 2020 and worst September return since the 2008 global financial crisis. The MSCI All Country World Index sank to a new 2022 low, dropping 6.82% in Q3, marking the first time the global index posted three consecutive quarterly losses since 2009. Year-to-date the index is down 25.63% in its worst nine-month start since its inception in 2001. 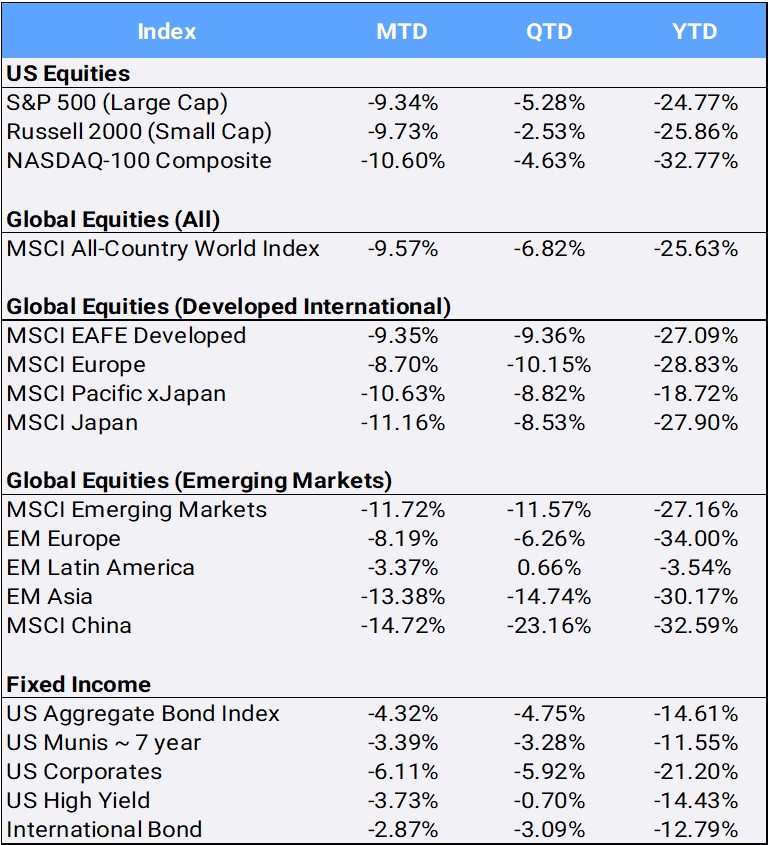 Click the image to view the chart larger.
Source: Bloomberg Pricing Data, as of September 30, 2022

Bond markets also sold off violently, as the U.S. aggregate bond index (AGG) fell 4.32% in September to bring declines to 4.75% for the third quarter and 14.61% YTD. International bonds sold off 2.87% in September, down -3.09% in Q3, and -12.79% YTD. Investors increasingly worry that the global economy might tip into recession following successive interest rate hikes by the U.S. Federal Reserve and central banks in Europe and Asia to cool inflation. Announcing the Fed’s third straight 75-basis point increase on September 21, Chair Jerome Powell signaled the intention to continue rate hikes to combat inflation, despite the risk of recession.

Currency markets are in flux thanks to the US dollar trading at its highest levels in 20 years; the greenback appreciated 7.10% in Q3 to bring its YTD climb to a staggering 17.19% against a basket of international currencies.

The Bank of Japan left interest rates unchanged but intervened to support the yen for the first time since 1998. The faltering currency has sent import prices rising, and August core consumer inflation accelerated to its fastest pace in 8 years. In China, monetary authorities were asking state banks to step in and defend its ailing yuan currency even as the People’s Bank of China has reduced its short-term borrowing costs to support its struggling economy amid continued Covid lockdowns.

New U.K. Prime Minister Liz Truss announced a dramatic new economic stimulus plan that included aggressive tax cuts for the wealthy; the British pound dropped to a new all-time low against the dollar, and her government was forced to retreat on the tax cuts. To stabilize the bond and currency markets, the Bank of England abruptly suspended its planned bond-selling program and announced it will instead begin “emergency bond” purchases of its long-dated UK government gilt bonds. On the continent, European Central Bank president Christine Lagarde promised additional rate hikes as Eurozone CPI reached 10% YoY in September.

After Germany reported September inflation accelerated to 10.9%, Chancellor Olaf Scholz said the world’s fourth-biggest economy faces a “double whammy” from skyrocketing local energy prices plus the threat to supplies from suspicious leaks discovered in the Nord Stream natural gas pipelines. European governments continue to deploy extensive funding to ensure natural gas supply: Germany nationalized gas import giant Uniper SE in a government bail-out to avoid the need for rationing, and the Netherlands announced a freeze on gas and electricity prices. While the diversified Bloomberg Commodity Index slipped 4.11% in Q3, it remains up 13.57% YTD. Crude oil prices sank 24.84% in Q3 but remain up 5.69% YTD. Meanwhile, Natural Gas jumped 24.74% in Q3 to bring YTD pricing to an eye-opening 81.39% as winter approaches.

Geopolitical tensions continue to focus on Russia, where President Vladimir Putin announced a “partial mobilization” of 300,000 additional troops in response to Ukraine’s recent battlefield gains, while also hinting at the possible use of nuclear weapons. He also moved to formally annex four Ukrainian territories, a sharp escalation in the war. MSCI Emerging Markets fell 11.72% in Q3 and are down 27.16% YTD. Brazil is an outlier; the local currency, the Brazilian real, has appreciated 7.74% YTD and its stock market has gained 11.53% in 2022 so far, The world’s 10th largest economy heads into presidential elections with both candidates promising more generous welfare and flexible budgets.

Only two sectors posted positive Q3 returns: Consumer Discretionary and Energy gained 3.89% and 1.65% respectively. Energy is the only sector to be in the black YTD, up 33.94%. In contrast, Consumer Services is the worst sector both for this quarter and YTD, falling -11.58% and -11.03% respectively. Real Estate was the 2nd worst Q3 performer, dropping -11.03%. In addition, the S&P Case-Shiller Home Price Index posted its first monthly loss since March 2012; prices eased by 0.4% as potential home buyers face mortgage rates that have doubled in the past 12 months.

Gold slipped -4.11% in Q3 for YTD returns down -9.22%. While many consider gold a safe haven during economic and geo-political crises, a high-interest rate environment makes the commodity less attractive to investors. The ten-year U.S. government bond yield closed the quarter at 3.83% after beginning the year at 1.51%. Bitcoin, the largest digital currency by market capitalization, gained 3.70% in Q3 and is now down 58.08% YTD.

Global Equities rallied 6.03% in October following September’s worst monthly showing since the Coronavirus pandemic shook global markets in March 2020. Still, the MSCI All-Country World Index remains in bear market territory and is down 21.14% on the year – marking its third-worst 10-month start to a year since the 2008 financial crisis and the 2001 dot-com collapse. In the U.S., equity indexes finished higher following a GDP report that came in above expectations growing 2.6% in the third quarter.

Last week stocks fell after the Federal Reserve dashed market hopes for an impending pivot in monetary policy in the form of a pause or slower pace of rate hikes. The technology-heavy Nasdaq Composite Index was hit particularly hard as growth stocks declined more than value companies. The Dow Jones Industrial Average held up much better, extending its relative outperformance from October.

Invitation: How to Talk Money With Your Family

For many of us, money is a taboo subject within the family. But financial conversations can also be important and even necessary. What do existing estate plans look like? Do older generations intend to contribute to grandkids’ college or wedding bills or give everything to charity? Do family elders have enough to support themselves without family assistance? Do we need to add “financial support to parents” to our own financial plan?

Last week equities recorded substantial gains as investors appeared to react to some prominent earnings reports and hints that the Federal Reserve might moderate its pace of interest rate hikes. The S&P 500 Index enjoyed its best weekly gain in nearly four months, while the Dow Jones Industrial Average marked its third consecutive week of gains. Energy shares outperformed within the S&P 500 as oil prices proved resilient despite announcing a U.S. Strategic Petroleum Reserve release. The small real estate sector lagged. Trading remained active and volatile due to the expiration of USD 2 trillion in options contracts on Friday.

Last week, most major indexes were lower as third-quarter earnings reporting season began in earnest, and investors weighed inflation data and their implications for Federal Reserve policy. By the end of the week, the S&P 500 Index had surrendered nearly half of its gains since its March 2020 bottom. Within the index, the typically defensive healthcare and consumer staples sectors outperformed. In contrast, consumer discretionary and communication services shares lagged, dragged lower by heavily weighted Amazon.com, Tesla, and Meta Platforms (parent of Facebook). Likewise, slower-growing value stocks handily outperformed their growth counterparts.

Let’s chat about sustainability and your portfolio.