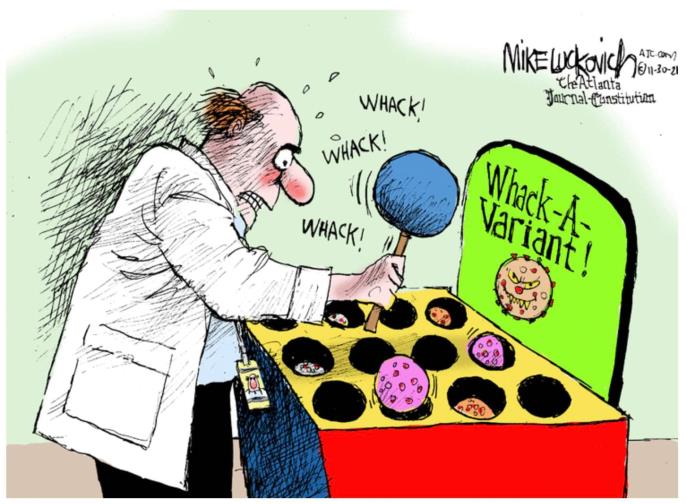 Last week the major indexes recorded gains, as a “Santa Claus rally” lifted the S&P 500 Index the reindeer to Santa’s sleigh to record highs. The technology-heavy Nasdaq Composite lagged and finished flat. Traders I spoke with noted that trading activity was exceptionally light, with S&P 500 volumes staying well under half of the recent averages for much of the week. The real estate, utilities, and materials sectors outperformed within the S&P 500, while the larger communication services and information technology sectors lagged together for over one-third of the index.

According to traders, despite daily coronavirus cases rising to record highs, waning fears over the omicron variant appeared to deserve much of the credit for the gains. Hospitalization rates remained contained, and, on Wednesday, the Centers for Disease Control and Prevention (CDC) reduced the recommended quarantine period for asymptomatic people who have tested positive from 10 days to five days. Investors also seemed encouraged by a study out of South Africa, which showed that omicron appeared to strengthen immunity against the more severe delta strain of the virus (shhh…but don’t tell the CDC).

Evidence arrived that the latest wave of the virus also had a milder effect on economic activity. Weekly jobless claims fell back to near five-decade lows, and continuing claims fell much more than expected and hit their lowest level since the onset of the pandemic. An index of manufacturing activity in the Mid-Atlantic region also showed accelerating growth. Pending home sales were an outlier, surprising on the downside, as high prices and limited inventory seemed to be dissuading buyers.

Americans seemed ready to spend on goods, however. According to data compiled by MasterCard, holiday sales rose 8.5% in December versus a year earlier, the biggest gain in 17 years. Sales were also 10.7% higher than pre-pandemic levels in 2019. The data suggested that supply and labor challenges might be easing for retailers while also passing on higher costs to customers. Retail stocks generally fared well on the news but declines in Amazon.com and casino and cruise ship operators weighed on the consumer discretionary sector. On Thursday, the CDC recommended against cruise ship travel, even for those who are fully vaccinated.

SOURCE: BLOOMBERG. THIS CHART IS FOR ILLUSTRATIVE PURPOSES ONLY AND DOES NOT REPRESENT THE PERFORMANCE OF ANY SPECIFIC SECURITY. PAST PERFORMANCE CANNOT GUARANTEE FUTURE RESULTS.

US Treasury yields were generally steady against a backdrop of light trading volumes and few critical economic data releases. According to traders, technical factors supported a modest rise in rates through the middle of the week, with the 10-year US Treasury note yield reaching an intramonth high of 1.55% on Wednesday. The 10-year yield retreated to roughly 1.50% by Friday morning, as rates generally retraced their early-week increases.

According to traders I spoke with, investment-grade corporate bond spreads—the extra yield offered over Treasuries and an inverse measure of the sector’s relative appeal—tightened at the start of the week, though trading activity was relatively muted. Volumes stayed well below daily averages, and thin market participation persisted throughout the week. Demand from Asia was focused on the long end of the yield curve, but total overnight activity from the region remained light.

High-yield bonds posted modest gains amid very light trade volumes. They noted that weakness in travel-related stocks due to rising coronavirus infection rates generally did not seem to impact the below-investment-grade bond market. No new deals were announced during the week.

SOURCE: BLOOMBERG. THIS CHART IS FOR ILLUSTRATIVE PURPOSES ONLY AND DOES NOT REPRESENT THE PERFORMANCE OF ANY SPECIFIC SECURITY. PAST PERFORMANCE CANNOT GUARANTEE FUTURE RESULTS.

European shares rose in holiday-thinned trade as omicron fears eased and investor optimism about the economic recovery strengthened. In local currency terms, the pan-European STOXX Europe 600 Index ended the week 1.09% higher, rebounding more than 22.0% on the year. The main indexes also posted gains, with France, Italy, and the UK closing near their highest levels for the year. Germany’s Xetra DAX Index added 0.82% over the week, France’s CAC 40 increased 0.94%, Italy’s FTSE MIB advanced 1.22%, while the UK’s FTSE 100 Index was little changed.

Coronavirus infections surged to record levels over Christmas in France, the UK, Italy, and Spain, among other countries, boosted by the omicron variant. France, Italy, Portugal, Denmark, and Greece tightened measures to prevent the virus from spreading during New Year’s celebrations. In Portugal, where omicron is now the dominant strain, working from home will become mandatory in January, while France ordered people to work from home three days a week. The UK decided to wait until early January to assess the impact on hospitals before making a move.

In a holiday-shortened week, Japan’s stock market returns were muted, with the Nikkei 225 Index up 0.03% and the broader TOPIX Index gaining 0.28%. Investor sentiment was dampened by the spread of the omicron variant through community transmission in the country; suspending the entry of foreign nationals alone has not appeared to contain the spread of the virus. However, the overall number of cases remained relatively small compared with the fifth wave, which prompted the government to implement states of emergency. Against this backdrop, the yield on the 10-year Japanese government bond rose to 0.07% from 0.06% at the end of the prior week, while the yen weakened to around JPY 115.1 against the US dollar from the previous week’s 114.4.

Lastly, Chinese markets ended a tumultuous year with modest losses for the week. The large-cap CSI 300 Index declined 0.2%, and the Shanghai Composite Index shed 0.1%. Upbeat manufacturing data and comments from Chinese officials about the country’s beleaguered property sector boosted sentiment. According to Reuters, the CSI 300 Index lost 5.2% in its worst annual showing in three years, while the Shanghai Composite Index added 4.8%. In Hong Kong, the benchmark Hang Seng Index retreated 14%—its worst performance in a decade—and the Hang Seng China Enterprise Index lost 23% in 2021.

Important economic data released this week include Consumer Credit and the Unemployment rate.

Past performance is not indicative of future results. As amended, Perigon Wealth is an independent investment adviser registered under the Investment Advisers Act of 1940. Registration does not imply a certain level of skill or training.

The information contained in this e-mail message is intended only for the personal and confidential use of the recipient(s) named above. Suppose the reader of this message is not the intended recipient or an agent responsible for delivering it to the intended recipient. In that case, you are at this moment notified that you have incorrectly received this document and that any review, dissemination, distribution, or copying of this message is strictly prohibited. If you have received this communication incorrectly, please notify us immediately by e-mail and delete the original message. This message is provided for informational purposes and should not be construed as a solicitation or offer to buy or sell securities or other financial instruments. Past performance is not a guarantee of future results.