Global equities tumbled 8.00% in April to bring their YTD return down to -12.94%, the second worst 4-month start to a year in the history of the MSCI All-Country World Index (lagging only the 2020 Coronavirus outbreak by a half of a basis point). Risk assets fell in the face of headwinds that include hawkish stances by global central banks to battle historically high inflation, disappointing earnings, a deepening of the Russia/Ukraine crisis and the lingering coronavirus pandemic. Even bond markets were unable to provide any reprieve as the U.S. Aggregate and international bond indices fell 3.49% and 2.47% respectively in April, posting a whopping -9.50% and -7.39% YTD. To put the sell-off in U.S. bonds in historical perspective, returns were even worse than the “Great Bond Massacre” of 1994, when bonds started the year with a -3.64% sell off before finishing down -2.92% in what until now was the index’s worst year since its inception in 1976. 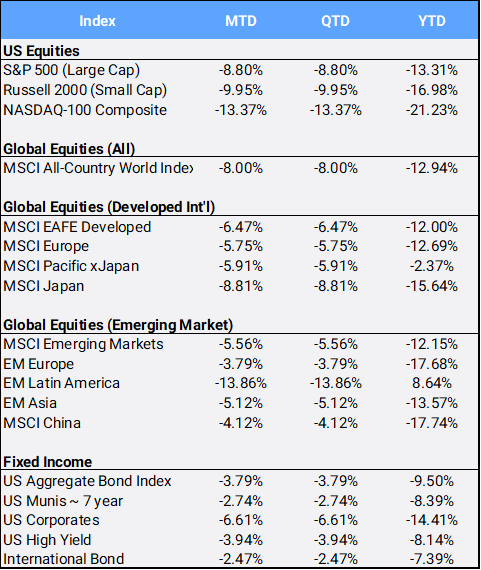 Click the image to view the chart larger.
Source: Bloomberg Pricing Data, as of April 30, 2022

More market superlatives include the S&P 500 falling 8.80% in April, the third worst 4-month start in its history with YTD returns down -13.31%. The tech-heavy Nasdaq composite’s April -13.37% drop was its worst month since the 2008 Great Recession. Amazon.com weighed the most on global indexes; its shares declined 23.75% in April, including a -14.05% drop on the final day of the month – its worst one-day return since 2006—as it reported a surprise $4B loss and forecasted weaker revenue growth.

As if all this weren’t bad enough, a U.S. Commerce Dept report released April 228 showed an annualized -1.4% contraction in GDP in Q1 that was largely attributed to a widening trade deficit and slower inventory investment but still stoked recession fears in an economy hampered by labor shortages and high inflation. The CBOE/S&P Volatility Index, often referred to as the “fear index,” spiked to 33.40 in April, nearly double 17.22 where it started the year.

The diversified Bloomberg Commodity index surged 4.14% in April for YTD returns of 30.75% –off to its best yearly start since 1973, when it gained 32.43%. Both oil and natural gas prices continue to skyrocket amidst geopolitical tensions, gaining 4.40% and 28.39% respectively in April to bring YTD returns to 39.20% and 94.21%. Russia said it will stop selling natural gas to Poland and Bulgaria due to their refusal to pay in rubles and Germany lifted its objection to embargoing Russian oil and gas, paving the way for a possible EU ban as Moscow maintains its military focus on territorial gains in Eastern Ukraine.

The U.S. dollar index appreciated 4.73% in April to bring its 2022 return to 7.62% against a basket of diversified currencies. However, the Japanese yen is the newsmaker, as it depreciated -11.23% in April and -19.18% YTD against the U.S. greenback to levels not seen in 20 years, an astounding move for any currency but especially from the world’s third largest economy. The Bank of Japan continues to enable the depreciation, as it pledges unlimited bond purchases to keep interest rates low. The U.S. Federal Reserve is doing the opposite, pledging to reduce its balance sheet and raise interest rates at each of its upcoming meetings, starting with a ½% rate hike at its May meeting.

Elsewhere in Asia, Chinese stocks continue to struggle, with the zero-Covid policy imposing drastic restrictions on mobility and production; the benchmark Shanghai Composite index closed April by squeaking up 1.4% from its recent low on April 27 but still down -15.79% YTD. In Europe, GDP figures in the Eurozone showed modest growth in Q1 even while inflation reached a record high for the sixth straight month. A swell in consumer prices fueled speculation that the Royal Bank of Australia could begin raising rates next month, while the Bank of Canada governor said a 50bps hike is on the table for the June 1 meeting.

As most central banks across the globe (save Japan) prepare to raise interest rates in the battle against rising inflation, non-yielding assets suffered: precious metals sold off in April as gold, silver and copper fell 2.09%, 8.13%,and 7.30% respectively. Meanwhile, bitcoin, viewed in crypto circles as a store of value, sank -15.75% in April and is down -16.78% YTD.