Global Equities gained 2.50% to finish August at their all-time high and to bring YTD returns to 15.91%. In the US, the S&P 500 Index notched its 53rd record close in August, clinching its highest number of records in a calendar year. The US Large Cap stock benchmark climbed 2.90%, its seventh consecutive monthly gain, best winning streak since early 2018 and, with a YTD gain of 20.41%, the strongest January-to-August record since 1997. US equity indexes rallied as investors weighed the tragic events in Afghanistan against more transparency on the Federal Reserve’s monetary policy timeline. 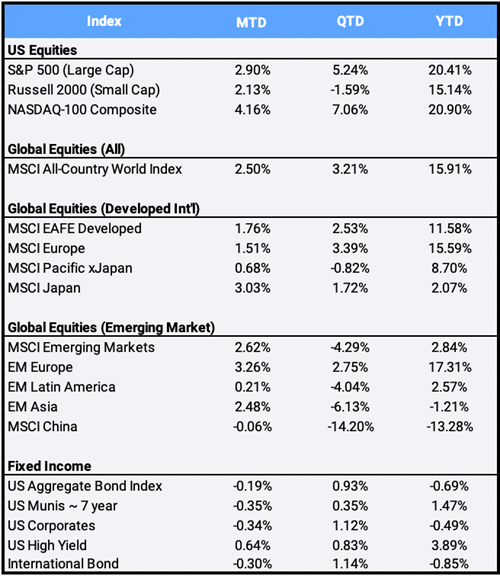 Click the image to view the chart larger.
Source: Bloomberg Pricing Data, as of August 31, 2020

The tech-heavy Nasdaq Index closed the month at an all-time high, gaining 4.16% to bring YTD returns to 20.90%. However, the financial sector was the leader in the hot August rally, gaining 5.14% to become the 2nd best performing sector so far in 2021 with its 31.57% YTD return. The US 10-year bond yield finished the month at 1.309%; notably, it was the widening spread between the U.S. two-year and 10-year yields – seen as an indicator of higher growth and inflation and impacts banks’ profitability – to 110 basis points compared to a spread of 57 bps a year ago – that encouraged investors.

Despite PCE Core Price Index data showing annual price increases at a 30-year high of 3.6%, US Federal Reserve Chair Jerome Powell reiterated his beliefs that higher prices are not broad-based, surge-price categories are moderating and that both wages and long-term expectations don’t suggest “excessive inflation.” He also confirmed that asset purchase tapering is likely to begin later this year, but that interest rate hikes aren’t on the table until the more stringent maximum employment test is met. The broad-based US Aggregate bond market slipped -0.19% this month, and US municipal bonds traded -0.35% lower, to mark the muni market’s first loss since February. US Treasury Secretary Janet Yellen continues to urge Congress to raise the debt ceiling and warns of economic harm should the country’s borrowing capability be exhausted come October.

The MSCI EAFE Index, which is dominated by companies from Europe and Japan, gained 1.76% this month. Germany’s August Purchasing Managers’ Index PMI fell from July but remained solidly in expansion as Q2 GDP grew at 1.6%. The German Business Climate Index dropped for a second straight month in August as exports to China fell -3.9% YoY. Europe’s Consumer Price Inflation, CPI, rose 3% year over year, and the minutes from the ECB’s latest policy meeting noted concerns of understating inflation risks that may or may not be durable.