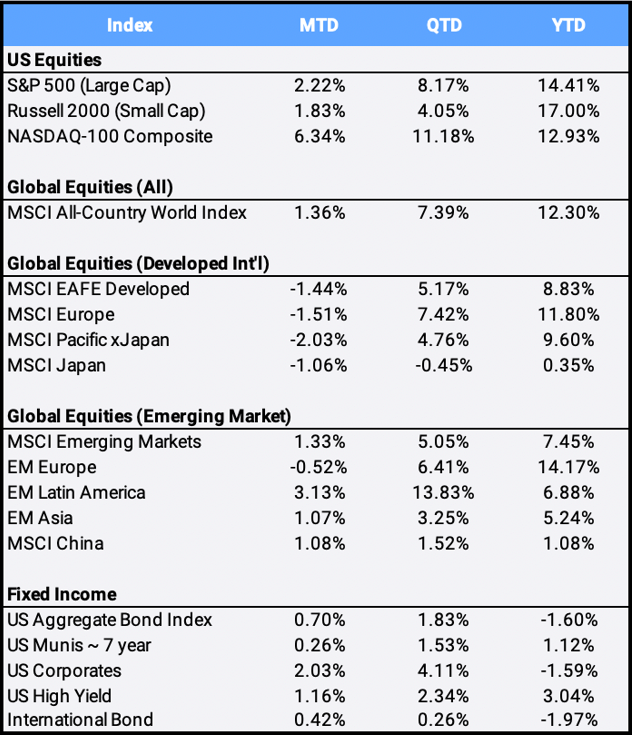 Click the image to view the chart larger.
Source: Bloomberg Pricing Data, as of June 30, 2020

The large-cap and technology-dominated Nasdaq 100 index gained 11.18% in Q2 to pull YTD returns to 12.93%. However, “big tech” faces renewed scrutiny as a US House committee advanced legislation to curb the market dominance of domestic tech giants. Globally, regulators are also scrutinizing technology: Facebook is embroiled in a dispute with India over encryption, and both the EU and the United Kingdom have announced antitrust investigations of Apple and Google.

International market returns for the quarter and first half were highly respectable, though lagging their U.S. counterparts. The MSCI EAFE developed market stocks gained 5.17% QTD and 8.83% YTD, while the MSCI Emerging Markets returned 5.05% in Q2 to bring 2021 returns to 7.45% YTD. Investors worries are focused on a contagious strain of the delta variant of the COVID-19 that may dent the economic recovery overseas, where vaccination rates have lagged that of the U.S.

The US Aggregate Bond Index rebounded 1.83% in Q2, following its 3.37% plunge in Q1 that marked its worst quarterly return since September 1981. The 10-year treasury yield started Q2 at 1.74% and finished at 1.46%, with bond prices moving move inversely to interest rates. In Congressional testimony Federal Reserve Chair Jerome Powell acknowledged some uncertainty around price increases but reiterated that they will likely wane.

A flurry of speeches from Fed governors produced mixed messages, with some assuring that rate hikes and tapering are off in the future, while others took a more hawkish stance citing speculative bubble concerns. The surge in U.S. home prices during the pandemic also has been a key focus. The Case-Shiller National Home Price Index recorded an increase of 14.6% over the past year, surging to the fastest pace ever as buyers competed for a limited number of homes. The separate 20-city index, which gauges home prices across a group of major cities around the country, increased at over the past year by 14.9% in April, well past the 13.3% growth recorded the month prior. “These are growth rates that rival the bubbliest years of the mid-2000s housing boom!” wrote analysts at BCA Research.

In Europe, European Central Bank President Christine Lagarde brushed off inflation concerns, saying the U.S. recovery was ahead of the Eurozone’s. International bonds gained 0.26% in Q2 but are down 1.97% YTD. A basket of international currencies appreciated 0.28% against the U.S. dollar in Q2, but is down 0.93% YTD against the stronger 2021 greenback.

The US Core Personal Consumption Expenditure (PCE) Price Index rose 3.4% in May, the fastest increase since 1992, with most of the inflation surge coming from energy prices. Crude oil prices traded over $74/barrel on June 25th, their highest level since October 2018, as U.S. inventories continued to decline and summer travel heated up.

Bitcoin closed June at 34,585. The world’s largest cryptocurrency experienced a second-quarter price drop of 41.34%, snapping a four-quarter winning streak that saw prices chart a sixfold rise to almost $65,000 in April. Even after the shellacking, the asset billed as “digital gold” remains up 19.27% YTD.