Global Equities traded at all-time highs this month; the MSCI All-Country World Index gained 5.10% in October to bring returns to 16.79% so far in 2021. U.S. large-cap stocks drove returns as the S&P 500 and Nasdaq 100 finished out October at all-time highs, gaining 6.91% and 7.90% respectively and clinching their best month since November 2020. These returns and solid earnings come despite global supply chain disruptions and the rebounding COVID delta variant. As of month-end, almost half of the S&P 500 had reported quarterly results and more than 80% of them beat earnings estimates from Wall Street analysts. 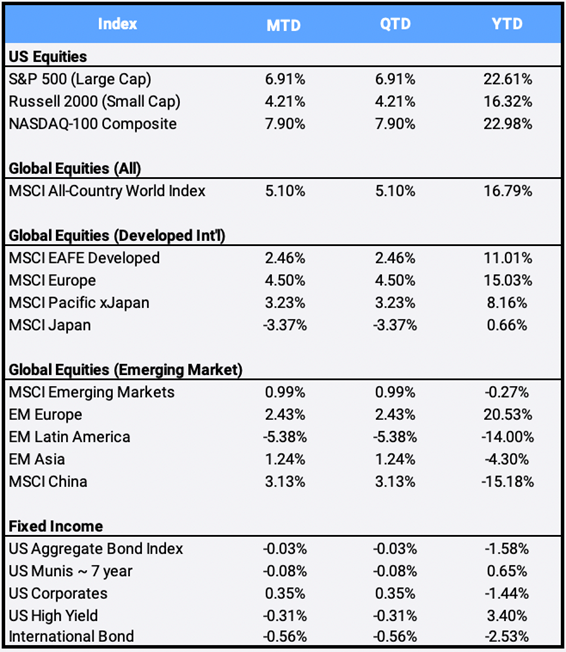 Click the image to view the chart larger.
Source: Bloomberg Pricing Data, as of October 31, 2021

International equities lagged this month, as the developed market MSCI EAFE and the MSCI Emerging Markets indexes returned 2.46% and 0.99% respectively. MSCI Japan was the worst EAFE performer, slipping -3.37%; the yen depreciated -2.66% during an election month in which the ruling Liberation Democratic Party retained its outright majority. Meanwhile, MSCI Brazil was the emerging markets’ worst performer for the second consecutive month, falling -9.07% in October. Hurt by deteriorating public finances, higher interest rates and a worsening outlook for economic growth, Brazil equities have entered a bear market, and are now off -23.87% YTD.

October saw mega-cap companies jockey for positioning. Tesla gained 43.65% to become the sixth company in US history to be worth $1 trillion, after news that Hertz announced a record order of 100,000 Tesla cars for its rental fleet. It was the second fastest company to reach that milestone, just 12 years after its 2010 IPO. Only Facebook, which is rebranding itself on December 1st as “Meta,” reached the landmark faster, in nine years of trading. In the top spot among giants, Microsoft gained 17.63% in October to surpass Apple as the largest listed company in the world by market capitalization. Apple gained 5.87% this month, despite missing Wall Street revenue estimates for the first time since May 2017. Both Apple and Microsoft are now worth more than $2.4 trillion. Amazon and Alphabet are the other two mega-cap companies, ending October at $1.70 and 1.97 trillion respectively.

Bond trading was mixed this month, with the US Aggregate Bond index nearly flat with a -0.03% October return. The real story was duration, as the U.S. yield curve flattened in anticipation of rate hikes due to higher inflation. The U.S. 10-year and 30-year yields slid -10 and -15 basis points respectively, while the 2-year note jumped 7 bps. The spread between the 5 and 30-year narrowed to the lowest point since March 2020.

October was a big month for bitcoin, which gained 43.65% following its -7.60% in September slide when China declared a ban on all cryptocurrency transactions. On October 1st and in the U.S., Federal Reserve Chairman Jerome Powell testified before Congress and said he had “no intention” to ban cryptocurrencies. On October 19th the first U.S. listed bitcoin futures ETF began trading and hit $1 billion in volume on its first day and amassed over $1 billion in AUM within its first two days, making it one of the most successful ETF launches in history. The world’s largest cryptocurrency hit an all-time high of almost $67,000 during the month and is up 115.19%YTD.